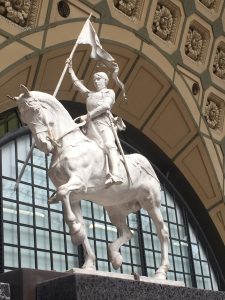 Last spring, my son Colin and I went to Paris– he for the first time; me for the first time in over 25 years. (How did that happen, Life?) We spent five days there, exploring some Parisian classics and some new neighborhoods. I was doing some research for a novel I’ve written set in Paris (Lost and Found in Paris, pub date April 2022 from William Morrow. Pre-order here! ). Colin was finishing up a semester abroad in Greece & Italy and was a willing companion on my book research as long as it didn’t involve getting up too early.

Has Paris changed in the last two decades? You bet. More tourists, more English, and more lines at Notre Dame. And unlike the old days, everyone wears sneakers, even Chic French Women. But the most memorable aspect of our visit was just like I remembered it: walking the beautiful streets in the most beautiful neighborhood or the most beautiful parks in the most beautiful city in the world. And all that walking is totally free and gets you the step credits toward that croissant in the morning.

You can find the podcast here. Here are a few highlights from our Mother-Son Trip

My Paris novel has an art history focus, so there were a few sights I needed to see to double-check my plots point but this was a winning combo even if you didn’t have to do research! We started with a museum visit and a Tour of Montmartre– a short course in 19th & 20th Century Art History. 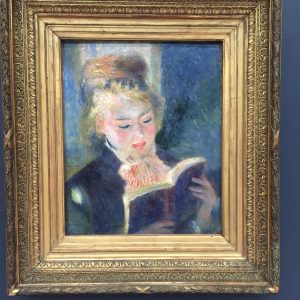 Monet. Manet. Renoir. Cezanne. Van Gogh. The hits keep coming.  It’s an embarrassment of riches here at this spectacular museum housed in a former train station. The physical space is impressive and the collection is unparalleled. Toss in two pretty great restaurants and a gorgeous view of Paris from the 5th-floor balcony and this is a must-do in Paris. Many would say this is their favorite museum in Paris, over the much more chaotic Louvre. We started our visit with lunch on the casual restaurant on the top floor, reasonably priced, solid food, and a great venue. Then we spent about 4 hours taking in the collection. Save your tickets for free entry to various museums over the next few days. Visit the website for details. 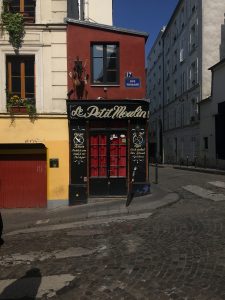 Stop with the charm, Montmartre.

I signed Colin and I up for this Sunday morning walking tour of the original Bohemian hot spot because Montmartre and Sacre Couer factors into my upcoming novel… but I’d never actually been there in previous visits to Paris. I had high expectations because Context Tours has a great reputation and promises tours for the “intellectually curious”—and I like to think Colin and I fall into that category, at least after coffee. What I didn’t expect the tour to jibe so well with our visit to the Musee d’Orsay. Marie, our tour guide, was armed with two Masters’ degrees in Art History, great storytelling skills and an iPad. As we wandered the charming street, she was able to point out the house, bars and hang-outs of the artists, writers and philosophers who populated Montmartre in the 19th & early 20Th century, from Lautrec to Mondrian to Van Gogh who lived behind those blue doors in my photo. Marie would pull up masterpieces from the museum website, like Renoir’s Bal du Moulin de la Galette and show us exactly where the artist must have stood to create the painting. Chills. We also spotted several locations from the movie Amelie, like the adorable restaurant where she worked The Two Windmills—and where we later had lunch because we love that movie. I can’t recommend this tour enough and wish we’d taken another one about the French Revolution. Next Time! 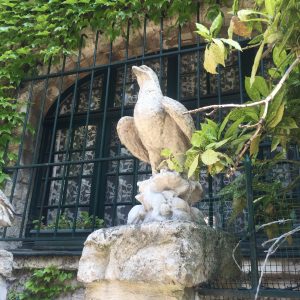 Like it’s more famous Roman cousin, this Pantheon is a giant domed building with a. monumental peristyle but stodgier and with a bit of an identity problem. Built as a church, it’s now a secular building dedicated to French intellectuals and features murals about the lives of the saints and the tombs of writers, philosophers and scientists like Rousseau, Alexander Dumas and Marie Curie. We went for some book research and the Curie tomb, but that section of the crypts was closed which bummed us out.  Even still the trip was worth it to walk through the Latin Quarter, much fancier than my last visit to Paris when it was truly a student-centered neighborhood. Many cafes and shops to explore and beautiful streets to wander as you head up ( or down) from the Pantheon.  And from the steps of the Pantheon, there is a great view of the Left Bank and the Eiffel Tower in the distance. 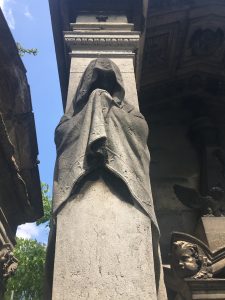 Even the dead wear great coats

The famous Parisian cemetery that doubles as a pleasant place to spend a Sunday afternoon picnicking with the family or enjoying a stroll in the shade. I admit, I had avoided this cemetray on previous students because back in the day, it was known most fro being the final resting place of Jim Morrison—and that didn’t inspire me. But Colin had this on his must-see list and I can say that this cemetery puts the “fun” back in funeral. The funerary monuments are epic, sad, evocative, significant and fascinating.  Established in 1804 and home to more than 70,000 souls, some of whom are very famous. We snapped a photo of the map at the entrance and wandered around for a about 90 minutes searching for the graves of residents like Chopin, Edith Piaf (Mystery fresh flowers arrive every day for the French singer), Moliere, Sarah Berhardt, Colette, Gertrude Stein and Oscar Wilde, a fan fave. I spotted Pissarro’s grave and loved the fact that we had just seen Pissarro’s house in Montmartre that morning.  Pere Lachaise is easy to get to with its own Metro stop. A fun, free (!)  stop where the dead bring history to life. I hope Madonna makes this her final resting place. It would suit her. 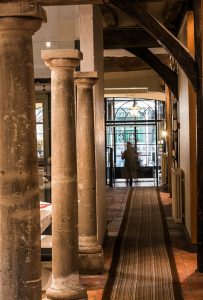 This special hotel on Ile St. Louis is a key setting in my book, but I only knew it from the TripAdvisor reviews that described it as “romantic,” “charming” and “historical.” It worked in fiction, but would it work for in real life?  Yes. It was a magical little 4-Star hotel, built on the bones of a 17th-century tennis court (Jeu de Paume) built for royalty and set on a picturesque street on the little island in the middle of the Seine.  Better than Fiction? Perhaps. The rooms are a decent size, the bathrooms modern and full service and the linens, don’t even get me started—they are soft and cozy.  Plus, the hotel comes with a. wonderful concierge, a little bar that is perfect for a drink at night and a dog who lounges in the lobby. Breakfast is not included in the price—but I enjoyed the croissants and coffee every day while my college kid slept. You’ll need to make reservations well in advance. A small hotel with a wonderful reputation means that it books up quickly. The Ile St Louis setting is charming- but there is a lot of ice cream tourism during the day with Berthillion, the best ice cream in the world according to some, right around the corner. One or two blocks off the main street and there are good restaurants nearby.

Our Paris dates moved around a couple of times, so we needed a spot for one night before our other reservation at the Hotel Jeu du Paume kicked in. I found this little gem online and we spent one night there. Located in the Latin Quarter, halfway between Notre Dame and the Pantheon, this was a lovely reasonably priced spot with great service and an excellent breakfast. The rooms were tight and the elevator was tiny—but at the price, it was a find. I would stay here again for sure. Loved the street and the tiny balconies off the room. Many cafes nearby.

Read More about our trip:

Wow, Europe has changed! Some Broad Cultural Observations on Travel to Paris & Rome 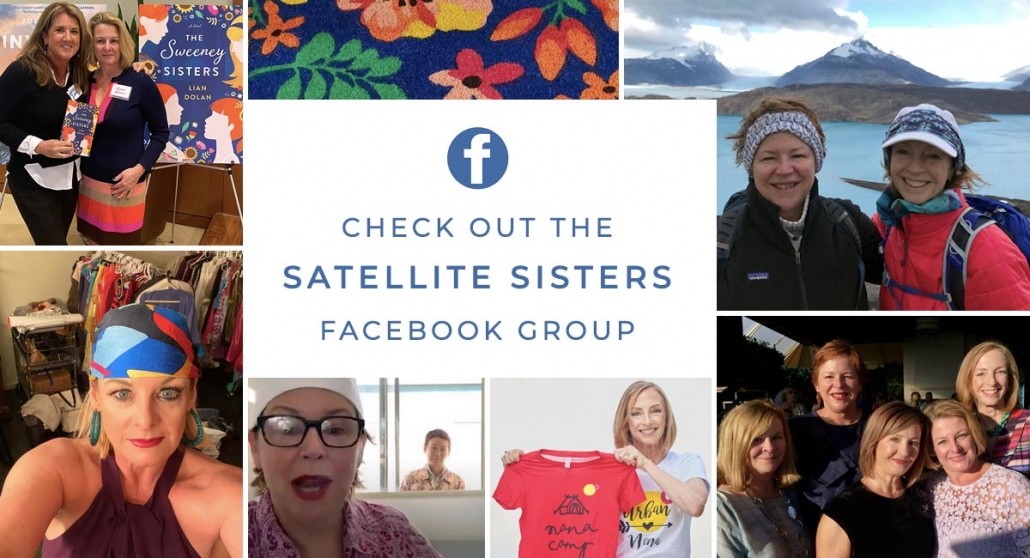